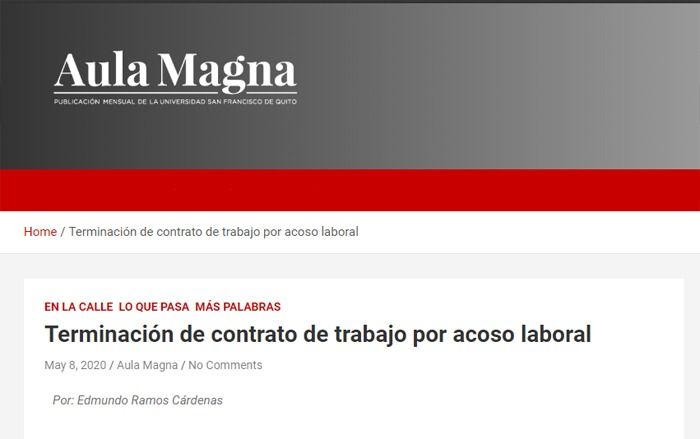 In November 2017, the concept of “workplace harassment” was incorporated into the Labor Code as a cause for “Visto Bueno” (termination with fair cause) for employer and the worker.

The Labor Code defines workplace harassment as “all behavior that violates the dignity of the person, repeatedly and potentially harmful, committed in the workplace or at any time against one of the parties in the employment relationship or among workers, which may result in the person affected being impaired, mistreated, humiliated, or that threatens or damages their employment situation. ”

Two elements of the definition stand out: (i) the law aims to regulate this type of action even outside the company’s facilities and outside working hours; and, (ii) regarding events that occur between workers, without necessarily one of them being the employer’s representative.

The law reform is inconsistent, since it forces employer to take responsibility for events beyond his control and outside his scope, allowing the employment relationship to be terminated – prior authorities approval´s – due to interpersonal relationships between workers that could happened in their free time.

Based on this, below an analysis of a “Visto Bueno” process when it is requested by the employer against a workers.

Article 172.8 of the Labor Code transcribed below includes workplace harassment among the grounds for the employer to terminate the employment contract, prior approval of “Visto Bueno”:

“For committing workplace harassment, either individually or in coordination with other individuals, towards a colleague, the employer or towards a subordinate in the company.

Prior to the request for approval of “Visto Bueno”, a conciliation chaired by the competent authority will be opened, in which besides the interested party, the representatives of the workers and the employer or whoever represents him will be heard.”

According to the transcribed article, the approval process could only be initiated, prior a conciliation proceeding between the parties, which implies that it will only be possible to initiate the “Visto Bueno” proceeding when it has not been possible for the parties to reach a conciliation or that the harassment persists despite the conciliation.

Consequently, the “Visto Bueno” could only be filed once the conciliation proceeding is finished, either in the workplace itself or before the labor authority (prior employee´s complaint).

The foregoing implies that the employer has approximately 22 days to initiate a “Visto Bueno” proceeding, considering that notice to worker takes approximately 5 business days from the day the request is filed.

Additionally, as the law requires prior conciliation before filing the “Visto Bueno” request, it is very likely that this will take more than 30 days between the harassment event and the notification of the request, in which case the action would have expired.

If you want to read this article in Spanish, click here